In Australian English, the word ‘labour’ is not spelled ‘labor’. The misspelling originated from the proceedings of the Federal Conference in 1902. In 1905 and 1908, they used the spelling ‘Labour’. In 1908, a motion to use the title ‘Australian Labour Party’ was carried by 22 votes to 2. Despite this, they again used the misspelling of ‘Labor’ after 1912. The miscarriage has continued ever since. This is typical.

“[Ross] McMullin observed that the spelling ‘Labor Party’ had more to do with the chap who ended up being in charge of printing the federal conference report than any other reason”. This is also typical.

And then despite the adoption of ‘Labor’ at a Federal level, it took decades for the official spelling to achieve widespread acceptance. 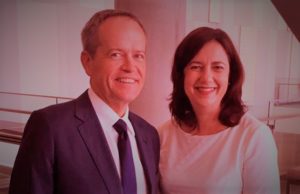 A Queensland farmer is fighting more than $112,000 in fines after harvesting his own fodder to feed his cattle in drought. Dan McDonald operates his own cattle grazing business north-west of Charleville that is reliant on mulga. He is being prosecuted for an offence characterised as ‘carrying out development without a permit’. Dan says his livelihood on the line. ‘Like any grazier that would buy grasslands, in this part of the world we buy the vegetation, that is mulga, to feed our cattle. 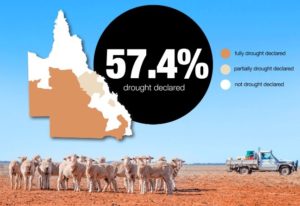 In August 2018, Palaszczuk launched the Queensland Drought Appeal during the Ekka. Palaszczuk and Agriculture Minister Mark Furner announced [that] the State would contribute $100,000.

Palaszczuk: ‘We haven’t forgotten our farmers, we have been making sure that families are getting the help that they need, but there has been a national awareness that has been raised as well, so we want to make sure our Queensland farmers are benifiting[sic] from that appeal’.

A $500 million Emergency Drought Relief Package was announced on Monday, which included about $190 million for the introduction of Drought Transport Subsidies. The transport subsidy of up to $20,000 per farm business, which would cover up to 50 per cent of the full cost of transporting fodder, water for stock and livestock to pasture, slaughter or sale, was back-dated to January 1, 2018 so farmers could access additional subsidies for freight expenses already incurred. About $100 million will also be spent on cutting the cost of farming fees and charges by waiving Local Land Services rates, waiving fixed water charges in rural and regional areas, and waiving class one agricultural vehicle registration costs among other initiatives.

Deputy Premier and Minister for Regional NSW John Barilaro said this drought had quickly worsened across the state because June and July were drier than expected, and farmers had been forced to source fodder from interstate as local supply has deteriorated.

‘We said we would constantly reassess the conditions and relief measures, and the fact we’ve now increased our drought-relief package to over $1 billion is a reflection of how serious this drought is, and how much we value the health and wellbeing of our farming and regional communities’, Mr Barilaro said.

‘Importantly, we have backdated this relief measure to the start of the year when the drought intensified, especially in Western NSW. This means eligible farmers who made the decision to destock earlier this year will still benefit from this new relief package’.

Premier Gladys Berejiklian said farmers are facing one of the driest winters on record, resulting in failing crops, drastic water shortages and a diminishing supply of fodder to sustain livestock.

‘We have listened to farmers throughout NSW who have told us they urgently need help’, Ms Berejiklian said. ‘To date we have already committed $584 million in drought support, most of which is focused on preparation for drought conditions. However, conditions are now so dire that further support is needed to address the more immediate needs for farmers and their communities until the drought breaks’.