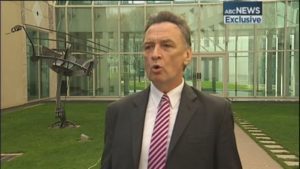 During an interview with the ABC, Emerson started “dancing” and “singing” ‘No Whyalla wipe-out, there on my TV’ to the tune of Skyhooks’ 1970s hit Horror Movie. Dr Emerson was responding to Opposition Leader Tony Abbott’s previous comments that the South Australian city of Whyalla would be ‘wiped off the map’ because of the carbon tax. ‘Singing is not right up there with my other abilities, but I was trying to get a very important point through’, Emerson told Sky News.

The comments Emerson was reacting to were originally from Wayne hanson, AWU state secretary:

Tony Abbott: “As the Australian Workers Union rightly pointed out a week or so ago, Whyalla will be wiped off the map by Julia Gillard’s carbon tax”. “Whyalla risks becoming a ghost town, an economic wasteland if this carbon tax goes ahead and that’s true not just of Whyalla … there’s not a state, there’s hardly a region in this country that wouldn’t have major communities devastated by a carbon tax if this goes ahead”. “I challenge the other unions involved in manufacturing to speak up on behalf of their members, to stop making excuses for a bad government and to stand up for the jobs of their members”.

It seems the ALP has a problem listening to workers.

Simon Birmingham: Now, we’ve seen Greg Combet and Julia Gillard respond to Wayne Hanson’s attacks today and they’ve brushed them off. It seems that the Government has both a tin ear for criticism and a complete disregard for protecting Australian jobs in this matter. They should be heeding the criticisms of the union movement. Journalist: Don’t you think it’s quite extraordinary that you’ve got unions really lashing out at a Labor Government? Simon Birmingham: I think it shows the level of anger and public concern that exists around the carbon tax. These union leaders would not naturally criticise the Labor Government. Clearly, they’ve heard the concerns of their members and on hearing the concerns of their members they’re now acting. That’s what all union leaders should do – listen to their membership, hear the concerns of their members that jobs will be on the line and take a stand against this policy. This policy threatens the viability of jobs in Australia, threatens their union members. They should all be standing up, not just a couple of them.

In 2016, the ALP-sympathetic New Daily wrote:

“The future doesn’t look bright for the Whyalla blast furnace and its 1100 workers, as it is unlikely to find a way to compete with massive Chinese plants with their low labour costs and huge production volumes.

Emerson has just been chosen to do a post-mortem on the 2019 ALP Election wipeout.