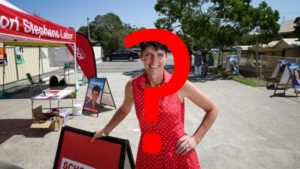 Asked about whether she would run for the leadership, Ms Washington, said: ‘The party has a process in place to select a new leader and that process will begin following the federal ­election’.

“One Labor MP yesterday ridiculed the fact Ms Washington might run and said it was the product of Labor general secretary Kaila Murnain wanting ‘anyone but Minns’ to win the ballot. Minns has emerged as the frontrunner in the leadership race but has a strained relationship with Ms Murnain. He was defeated by Mr Daley in a leadership ballot in November”.

What he didn’t say was that Minns became PNG*** after he bagged the unions in his maiden speech, see: ‘NSW Labor Politburo to ‘vet’ leaders‘

*** Persona Non Grata(adjective): a person who is unwelcome or unacceptable. Example: ‘After his public sex scandal Tiger Woods was persona non grata at his wife’s parent’s house’. Source: Urban Dictionary