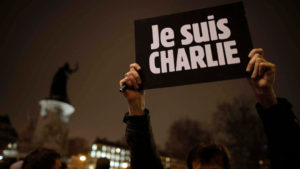 Justice Desmond Fagan, who has presided over a number of TERRORISM-RELATED CASES, said last week the ‘unqualified acceptance’ of the Koran by Australian Muslims ‘without explicit repudiation of verses which ordain intolerance, violence and domination … will embolden terrorists to think they are in common cause with all believers’.

‘If Australian followers of the religion, including those who profess deep knowledge, were to MAKE A CLEAR PUBLIC DISAVOWAL OF THESE VERSES, as NOT AUTHORITATIVE INSTRUCTIONS FROM ALLAH, THEN THE TERRORISTS’ MORAL CONVICTION MIGHT BE WEAKENED’.

Justice Fagan was sentencing Sameh Bayda and Alo-Bridget Namoa, a young couple, both 21, found guilty in October last year of conspiring to do an act in preparation for a terrorist act between December 8, 2015 and January 25, 2016.

Now, in an society such as Australia which holds TOLERANCE, NON-VIOLENCE and EQUAL RIGHTS as CORE VALUES, you’d expect community leaders, to BACK this statement of values (and also the law, which reflects those values), to the hilt.

So what was the reaction to Justice Fagan’s advice?

In a statement last week, ANIC said it was ‘disappointed and deeply concerned about the comments which were recently made by Justice Desmond Fagan directed at Australian Muslims and Islam generally’.

So if the Australian National Imams Council (elected by whom?) will not agree to “repudiation of verses which ordain intolerance, violence and domination”, then who will?

Not the Law council (elected by whom?) either apparently.

The president of the Law Council, Arthur Moses SC, said:
“Without referring to or passing comment on any recent case, I make the observation that we must ensure that the criminal actions of a few are not used to unfairly judge, discriminate against or condemn a whole community and religion and that those who break our laws are the ones that pay the price and bear the punishment – not others wrongly implicated by association. Ultimately, we are one community”.

Mr Moses welcomed the appointment on Wednesday of Sydney barrister Bilal Rauf as spokesperson for the Australian National Imams Council (ANIC). He said Mr Rauf’s “commitment to the administration of justice and to providing opportunities for engagement with the Australian Muslim Community is to be commended”.

On Thursday evening, high-profile members of the legal profession and the judiciary, including NSW Supreme Court and Federal Court judges, attended an Islamic Service to mark the opening of the 2019 Law Term at the Auburn Gallipoli Mosque in Sydney.

(*** PS: There is no such thing, no do we expect any such thing to ever exist)