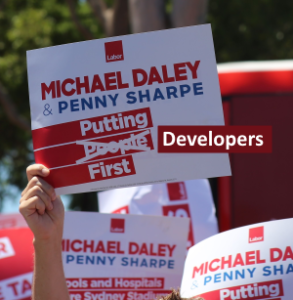 The NSW Treasurer, Dominic Perrottet, says Michael Daley’s failure to disclose developer donations should remind voters of Labor’s corrupt past. The Daily Telegraph revealed [that] he [Daley] failed to report donations from three developers during his time as a Randwick Councillor.

It’s claimed the Australian Labor Party received more than $600,000 in contributions from Argos Investments, Randwick Labor Club and Meck Investments and Affiliates while Daley was assessing their development applications. Daley also refused to support attempts to bring in transparency measures surrounding donors and Developers in the council.

Daley has declined several invitations to appear on 2GB.

Note : Section 145 makes it an offence for a person to do any act that is unlawful under this Division if the person is, at the time of the act, aware of the facts that result in the act being unlawful. Section 58 also provides for the recovery by the Electoral Commission of unlawful political donations.